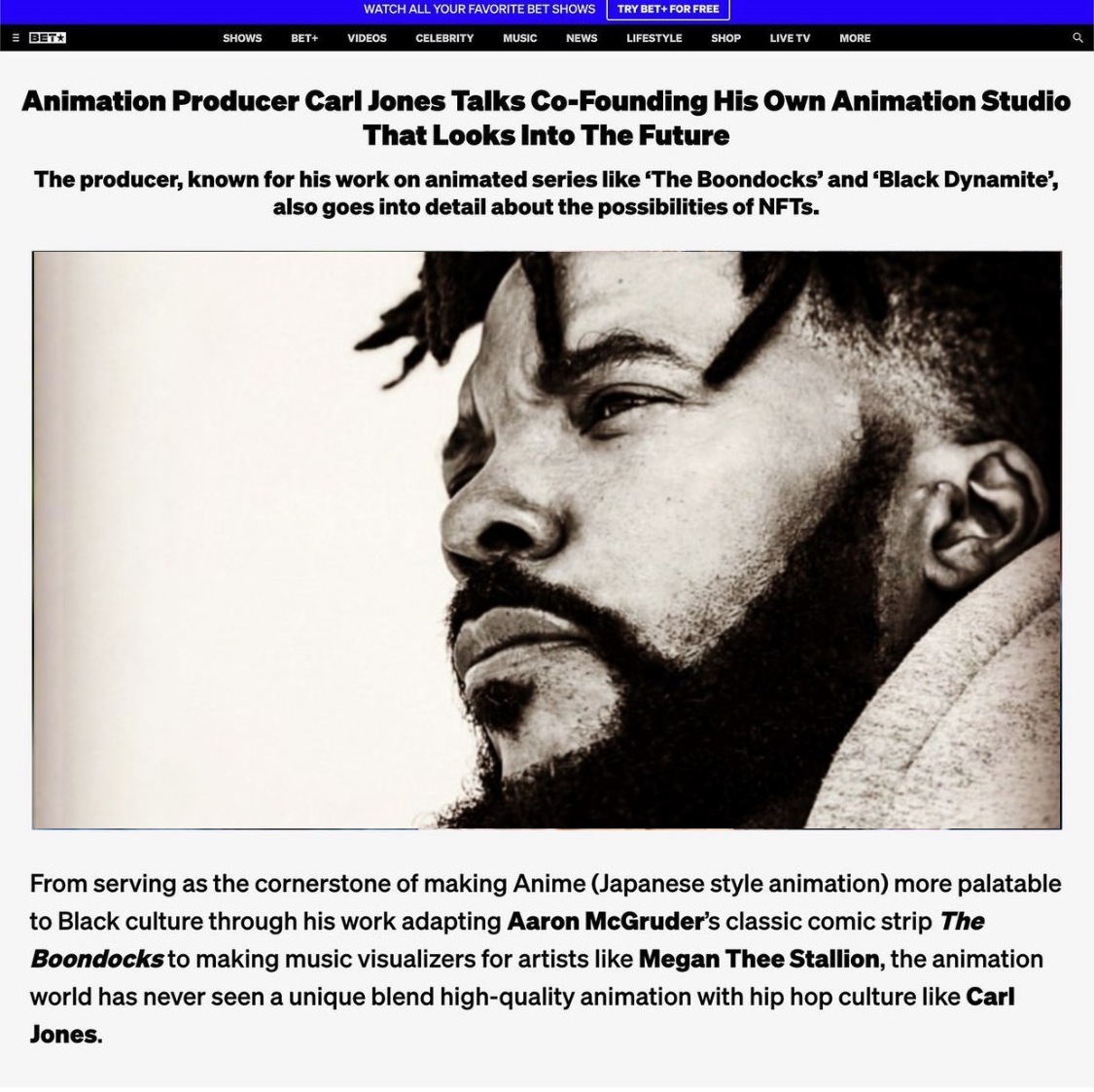 Jones’s biggest focus is Martin Blueberry, an animated studio he co-founded with partner Love Barnett. Beyond various television and film projects in the works, the company is kicking things off by embracing the future of digital commerce through an NFT release called Bubblegoose Ballers.

Speaking with BET.com, Jones discusses plans for Martin Blueberry alongside working with Megan Thee Stallion on the music visualizers for her Traumazine album.

BET.com: Martin Blueberry seems to be the next logical step for you, Carl Jones. What’s the overall vision for the company outside of being an animation studio in regards to where you want to go with things like NFTs and Web3?

Carl Jones: I started Martin Blueberry as an animation studio and since then, it’s started to evolve and grow into something bigger rapidly. I think part of the catalyst for that is my experience with the WEB3 world and releasing our NFT project Bubblegoose Ballers.

Since we had some success with building this really awesome community around this property, it really opened my eyes to all the things that you could do with this technology. Because when I first came into it, I was solely thinking about it as a way to build out this brand and create a community around Bubblegoose Ballers.

It then quickly developed into a bigger idea where we could actually build a web three studio that for the most part becomes a bridge between Hollywood and Web3. We’re helping other NFT projects develop their intellectual property into animated series and films while at the same time, helping filmmakers and showrunners in Hollywood develop IPs for Web3 and NFTs.

BET.com: There’s a lot of controversy over the usability of NFTs despite the market seeing a $230 billion valuation by 2030. Can you explain the possibilities of NFTs not only as a creator but on a consumer level using Bubblegoose Ballers as an example?

Carl Jones: First, I’ll just say this. I think NFTs have been stigmatized because, in the beginning, there were obviously a lot of bad actors that were in the space who pulled some serious finesses and took advantage of a lot of people. They pulled a lot of rugs and left a bad taste in people’s mouths. Some projects kind of caught lightning in a bottle and they were able to create a lot of hype around their project and allow the floor price to go through the roof and do ridiculous numbers and then that became the expectation. Now, a lot of people are looking for the next Bored Ape or whatever.

I wasn’t looking at using the technology to make the next Bored Ape. I just saw it as a way to seed the IP and create a brand. It’s more of a tool because I see the technology as pretty much neutral. It’s how people use it that determines whether or not it’s good or evil. I think it’s gonna really change the whole landscape for how we do business and even communicate.

BET.com: You’ve also done visualizers for artists like Megan Thee Stallion including some for her most recently released Truamazine album. She’s a serious Anime fan like yourself. Can you recall working with her?

Carl Jones: I mean it’s awesome working with people like Megan Thee Stallion who already has a love for Anime because she’s a super geek. I was excited about being able to work with her on that because when I work with other artists, rappers and entertainers, they may like the aesthetic of Anime but not necessarily be fans of it. Megan is someone who is like really into the stories. She had a real vision for how she would want her brand to be translated into animation. It was right in line with everything that we were doing too.

BET.com: Visualizers are becoming an important part of promoting music now. As an animator, what’s it like to watch the rise of those and things like lyric videos?

Carl Jones: It’s interesting because, before the pandemic, I was doing more live-action stuff like serving as the showrunner for  Tracy Morgan’s show The Last OG outside of other projects in development. When the pandemic hit Hollywood shut down. Then I started getting all these phone calls about animation and was like wow, animation is kind of pandemic proof. I think animation studios basically proved that because you can produce animation virtually from anywhere. That got me really excited about the possibilities of where we can go with animation in the future.

I think the pandemic pushed the medium of animation forward in many ways including music videos. There were commercials that I’ve seen popping up that I know would’ve been live-action had they been able to shoot it. You’re seeing more people not only exploring animation but starting to learn to appreciate it. I think it’s awesome right now seeing so much animation being made.

Article written by By Ural Garrett for BET.com